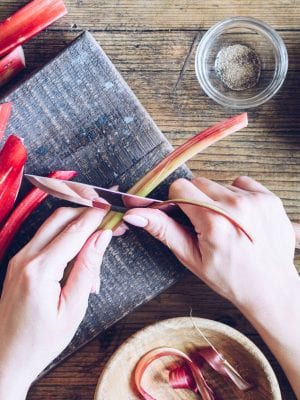 Rhubarb is an incredible ingredient. It’s a family-favourite that’s perfect in pies, terrific in tarts and an excellent addition to preserves.

It’s no wonder then that this vibrant veggie (more on that later) has been a mainstay of our diets for centuries now. But despite its enduring popularity, how much do you really know about this under-appreciated gem?

Here are nine fun facts that you probably didn’t know about rhubarb.

While we typically use it like we would any other fruit, did you know that rhubarb is actually a vegetable? In fact, it is actually part of the Polygonaceae family, which includes foods like buckwheat and sorrel.

2 – Humans have been using it for centuries

Humans have been enjoying rhubarb for thousands of years. It was originally found in Asia around 2,700 BC where it was used for medicinal purposes, but rhubarb eventually made its way West after it was discovered and popularized by Marco Polo in the 13th Century.

3 – It packs a healthy punch

Rhubarb stalks are packed full of health benefits. For starters they’re high in fibre, which is important for a healthy digestive system. Rhubarb is also an excellent source of calcium and vitamin K, things our body needs to keep our bones and blood healthy.

4 – But its leaves are poisonous

Despite its health benefits, however, we only eat rhubarb stalks because the leaves of the plant are actually poisonous to humans. That’s because those leafy greens have a high concentration of something called oxalic acid, which can lead to kidney stones and even organ failure when consumed in excessive quantities.

5 – You can actually hear it grow

In 1817 horticulturalists from Chelsea Physic Garden in London discovered the process of “forcing” rhubarb. Forcing involves the plants being grown in the dark, an act that enables farmers to harvest their crops well before the spring / summer season. It’s an incredible process, but what’s most surprising about forced rhubarb is that you can actually hear it grow. Yes, as strange as it may sound, rhubarb farmers regularly work to a soundtrack of squeaks and pops as the crimson-coloured stems of the plant mature.

6 – And you can find it all over the world

Despite its origins in Asia, today rhubarb can be found all over the world including right here in Canada where it grows from coast to coast. That’s partly due to the fact that rhubarb is a perennial, one that thrives in the kind of cooler climates that are typically found in this region of the Northern Hemisphere

7 – Its name has another meaning

Say the word “rhubarb” and your mind instantly conjures up images of long leafy stalks and gooey pie fillings. But for fans of baseball the word “rhubarb” has an entirely different meaning. That’s thanks to Red Barber, a play-by-play broadcaster who popularized the word as slang for an on-the-field fight.

After its introduction to North America in the 1700s rhubarb quickly became known as the “pie plant” thanks to home cooks’ fondness for using it as a pastry filling.

Sure it’s great in desserts, but rhubarb is so much more than         a mere pie filler. From canapés to chicken skewers, via mulled ciders, cakes and even frozen compotes, we’ve got all manner of rhubarb recipes to help you include this incredible ingredient into your family’s diet.

Looking for some inspiration to help incorporate rhubarb into your family’s diet? Check out our recipes section which is packed full of quick and easy ideas to help keep your family healthy.