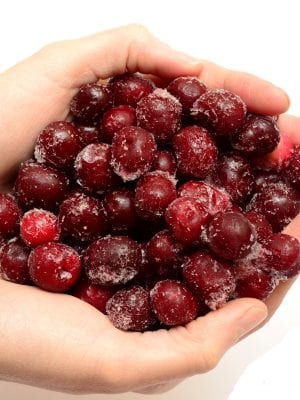 Turkey is great, stuffing has its fans too and let’s be honest, who doesn’t like pumpkin pie? But when it comes to Thanksgiving there’s one food that really stands out from the culinary crowd: the cranberry.

Jellied, pureed or cooked into your favourite dessert; these crimson-coloured goodies are as much a part of the annual holiday as family get-togethers and leftover turkey. But even though you’ve celebrated the season with these tangy little treats, there’s probably a good chance that you’ve never actually given cranberries much thought.

That’s all about to change however as we give you a crash course in cranberry content. From fun facts to incredible health benefits, here are nine things you didn’t know about these brilliant berries; tantalizing tidbits that might just encourage you to enjoy them all-year-round.

Back in the early days of oceanic exploration Canadian and American sailors used to eat cranberries as a way of staving off scurvy while at sea. That’s because cranberries are an excellent source of Vitamin C. They are also high in fibre and antioxidants, all of which your family needs to stay happy and healthy.

2. They can actually help fight disease

They may be small but cranberries pack a big punch in terms of your health. One of the most commonly known benefits of these miraculous berries is their ability to fight infections such as urinary tract problems.

The benefits don’t stop there, however. Research has also shown that the antioxidants and nutrients that naturally occur in cranberries can also help to battle a range of other conditions including heart disease, strokes and even cancer.

3. And can even give you a brighter smile

Unlike a lot of berries that tend to have a higher amount of sugar, cranberries’ trademark tartness comes from the fact that they actually contain very little of the sweet stuff. That will be music to the ears of your dentist. But it’s not the only reason why cranberries will put a smile on your face.

Contrary to popular belief, cranberries don’t actually grow in water. Instead, crops grow on vines in wetlands or bogs, with beds that are layered with peat, clay and sand.

Hang on a minute, we hear you cry, what about those pictures we’ve all seen where thousands of berries are floating in the water?

Well, those are the result of the farmers flooding their bogs, which they do twice a year. The first flooding takes place each December to protect dormant plants from severe winter weather. The second takes place the following October, when farmers flood the bogs to release, then harvest ripe berries from the vines. This is known as a “wet harvest.”

The reason why farmers are able to “wet harvest” their cranberry crops is that the berries are actually filled with small pockets of air. These pockets ensure that the berries float, but they also make the fruit bounce, which is an effective (albeit messy) crowd-pleaser come Thanksgiving dinner.

6. They can be really tough to grow

Though they are native to North America and millions of cranberries are farmed every year, these vibrant berries are actually quite difficult to grow. Not only do the finicky plants need acidic soil and plenty of fresh water, but they also require a long winter break (don’t we all?) In fact, cranberry vines lie dormant for months on end during colder periods, which is why cranberry season is limited to just three months from October to December.

7. Cranberries were part of the original energy bar

More than 400 years ago the cranberry was a key ingredient in pemmican, a Native American  equivalent of the modern-day energy bar. People would pound the berries and mix them with deer meat and fat. The resulting mixture was not only high in nutrition, but the natural bacteria-fighting properties of the cranberry would keep it fresh for months so that it could sustain travelers on long journeys.

Because they are in season for just a few months of the year, farmers and foodies have for generations tried to find ways to keep cranberries on the table all year round. One of the most famous of those is probably cranberry jelly, a Thanksgiving staple that we’ve all enjoyed at some point in our lives.

Cranberry jelly was first sold in 1941 by bog-owner Marcus Urann who was searching for a way to sell his crop throughout the year. The gelatinous consistency of cranberry jelly actually comes from a naturally occurring substance called pectin, which thickens when heated.

9. You can now enjoy them all year round

While we all love a bit of cranberry jelly at Thanksgiving, thankfully preservation methods have come a long way since the 1940s. Today we freeze our crops as soon as they are harvested so that we can lock in the delicious taste, nutritious value and high quality of BC grown cranberries.